Sepsis is a significant public health threat—it is the body’s overwhelming and life-threatening response to infection which can lead to tissue damage, organ failure, and death. One in three patients who die in a hospital have sepsis, making it the leading cause of death, and the most expensive condition, in U.S. hospitals. , Each year at least 1.7 million adults in the U.S. develop sepsis—one every 20 seconds—and more than 350,000 American adults die from sepsis—one every 90 seconds. Sepsis leads to more deaths than from stroke, prostate cancer, breast cancer, and opioid overdose combined.

Anyone affected by an infection, injury, or non-communicable disease can develop sepsis, but adults 65 or older, infants under the age of one, people with chronic medical conditions such as diabetes, lung disease, cancer, and kidney disease, people with weakened immune systems, and people with recent severe illness or hospitalization are at higher risk for sepsis. Pregnant and recently pregnant people are especially at risk for sepsis, which is responsible for 12.7% of pregnancy-related deaths, the second-leading cause in the United States each year. Even for those who survive sepsis, there may be post-sepsis sequelae such as fatigue, depression, or complications from sepsis resulting in amputations. In addition to the human costs, the financial costs are staggering, with more than $62 billion spent on sepsis annually in the U.S. for inpatient and skilled nursing care. 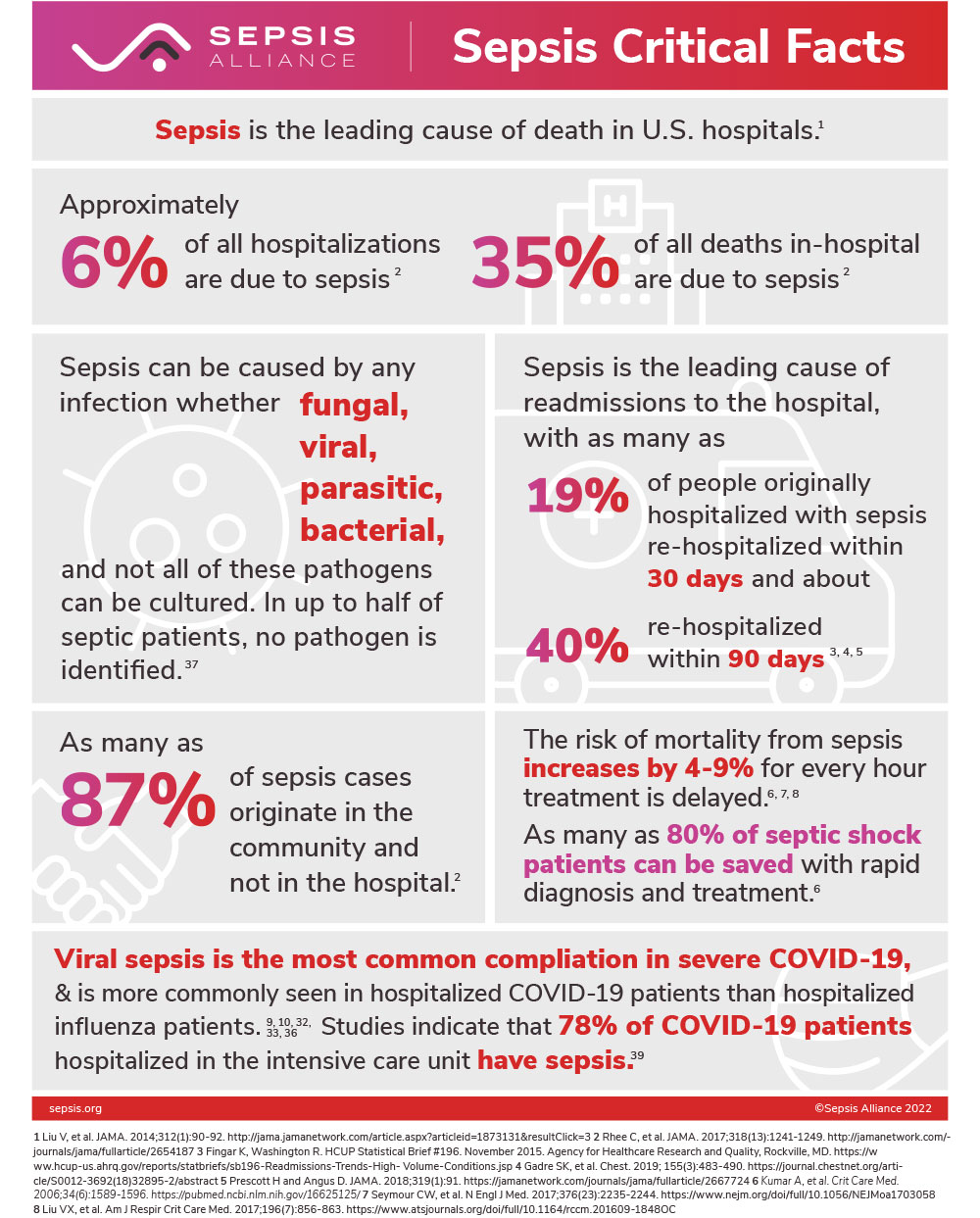 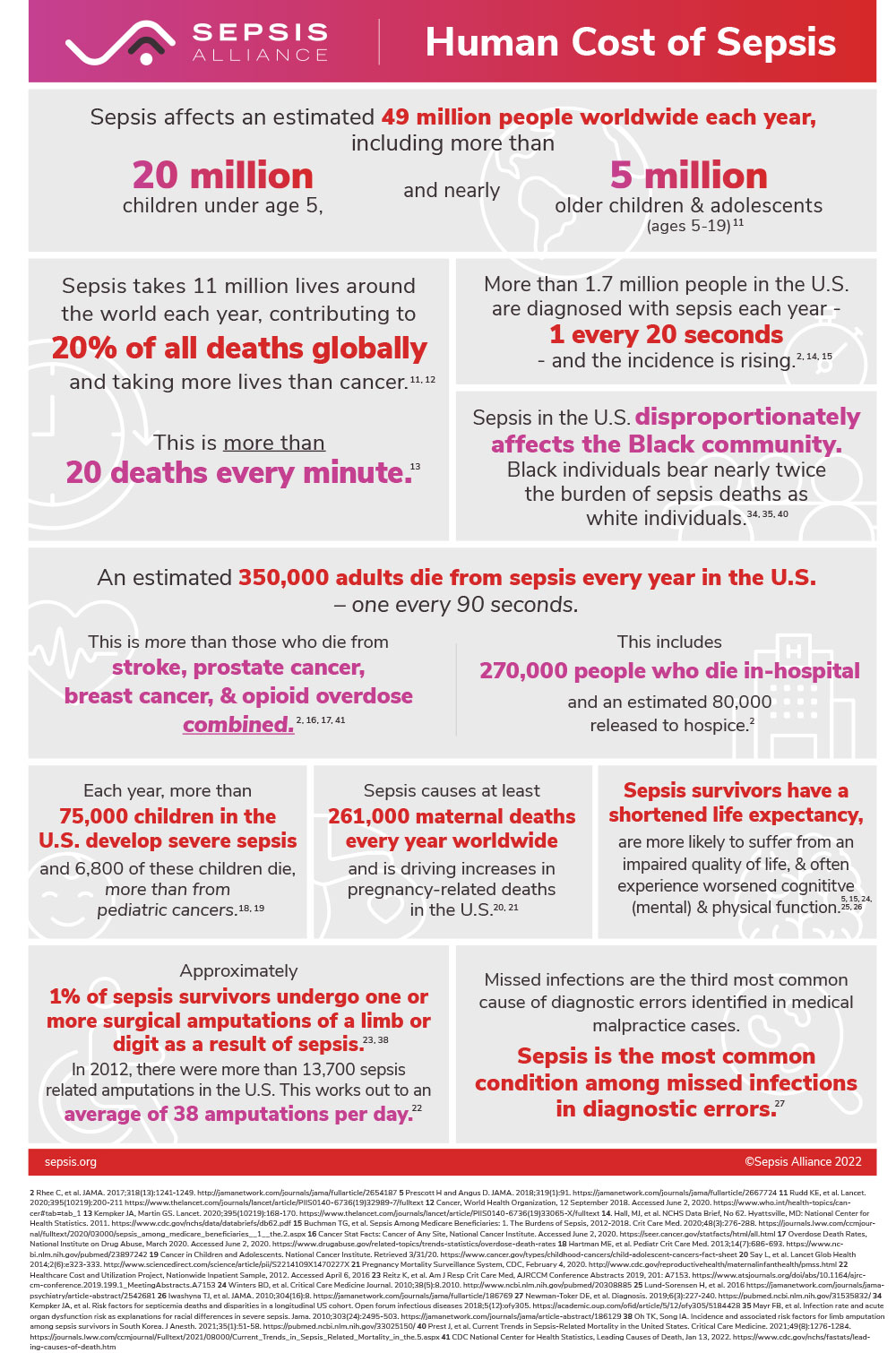 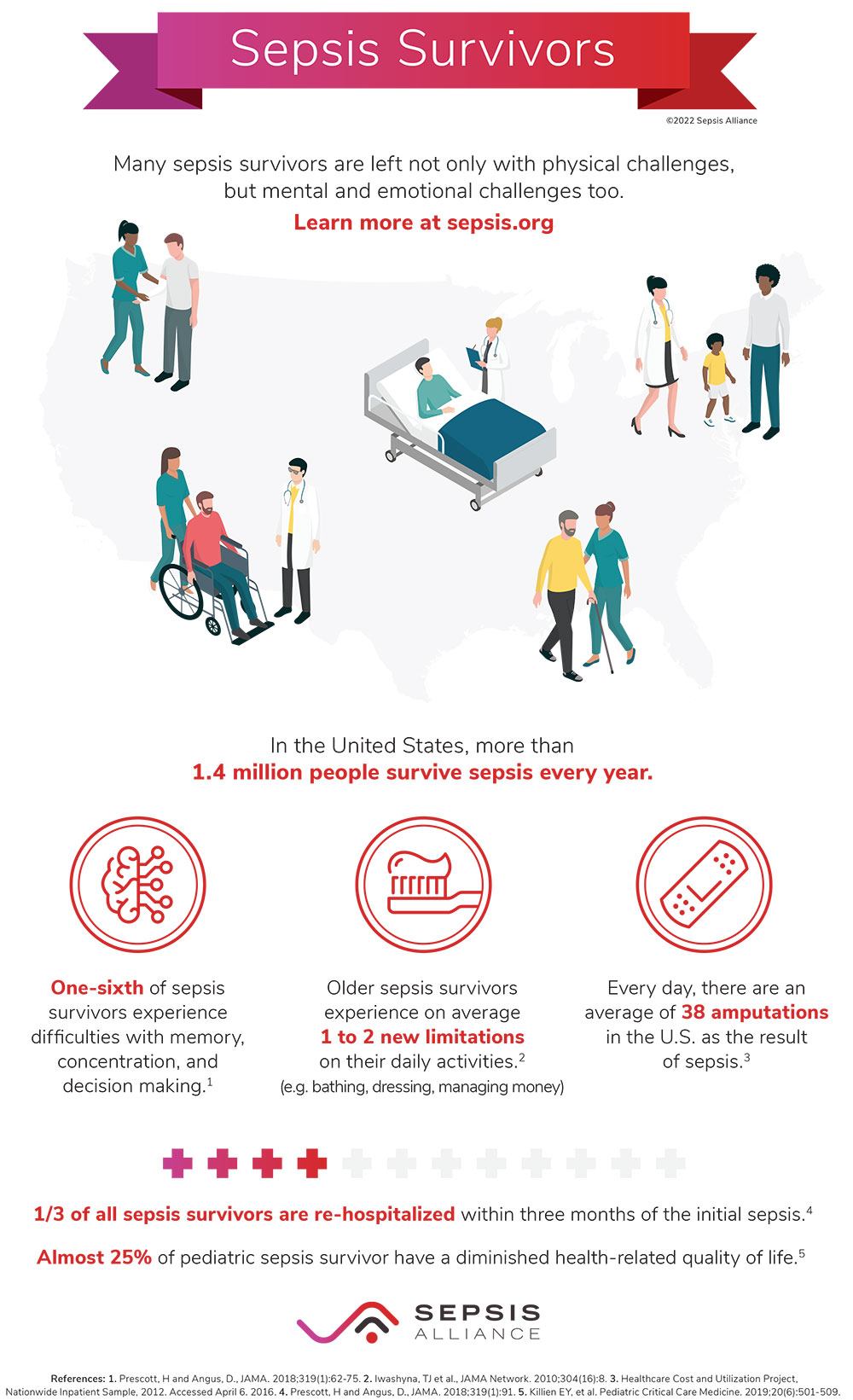 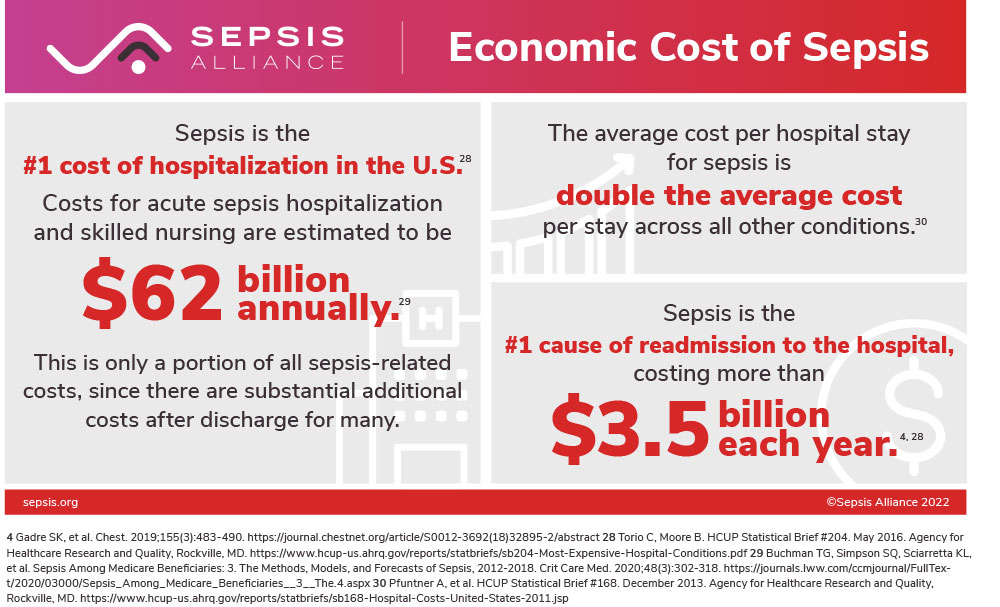 Challenges in Predicting and Treating Sepsis

Any infection can lead to sepsis, but it is difficult to predict or identify which patients are most at risk for sepsis or long-term complications. Sepsis is also difficult to identify and treat because of the variety in presentation of symptoms from person-to-person. This variety in patients can be due to the pathogen involved, comorbidities, and individual responses to disease. As the host responds to an infection and immune system dysregulation transpires, traditional pathogen-targeted approaches may be insufficient to prevent or control sepsis.

The clinical complexity of infection management, including early recognition of severe complications, such as sepsis, requires interventions to identify and mitigate severe outcomes. This includes products that could aid in the prevention, detection, prediction, treatment, and management of infection and its complications. This situation is compounded by the regulatory complexity associated with infection management and sepsis-relevant products, especially those based on the host response to infection and not the pathogen.

As a result, promising advances in basic research over the past decade have not resulted in a significant increase in new, widespread sepsis preventative measures, diagnostics, or therapeutics based on these discoveries.

Major obstacles to improved sepsis identification and treatment include:

The challenges impeding sepsis-related innovation are too large and/or too inefficient for a single stakeholder, or even a small consortium of stakeholders, to effectively tackle alone. Collaboration of diverse stakeholders involved at each stage of a patient’s journey through survivorship is critical to identify and pursue opportunities to address these unmet needs and improve innovation and equity in infection management and sepsis care.

Despite work of organizations to improve sepsis education and awareness, the acceleration of technology and innovation through public-private coalitions continues to lag. The limited existing collaborative efforts across the country are narrow in their scope, typically focusing on bedside process changes and healthcare quality improvements to address sepsis. Although important, this work lacks coordination amongst the many forces that can affect sepsis identification and treatment, including: 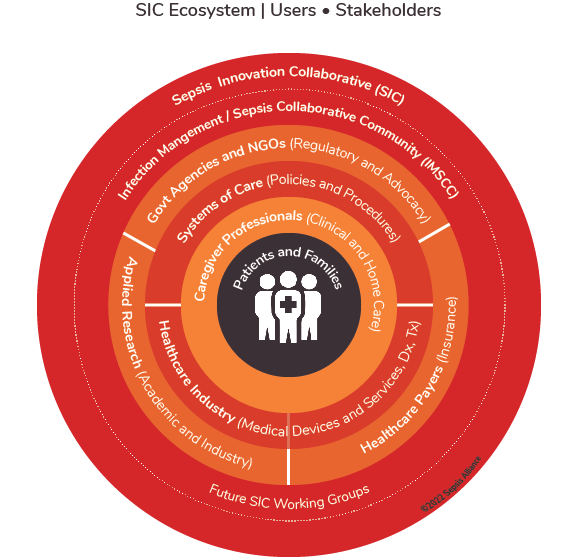 It is becoming increasingly apparent that the future of innovation is through precompetitive collaboration, bringing together multiple stakeholders with common pain points to develop solutions for the benefit of all. Precompetitive collaboration allows for the various industry sectors involved in infection management and sepsis to overcome operational hurdles and lower barriers to innovation that enable all stakeholders to make progress. This, most importantly, will save lives and limbs from sepsis.

One SIC working group is the Infection Management/Sepsis Collaborative Community (IMSCC), which provides a venue to enhance the understanding of SIC members’ perspectives by fostering communication and knowledge sharing, including planned engagement with the Food and Drug Administration (FDA) Center for Devices and Radiological Health (CDRH), to better align regulatory requirements and science in the medical device ecosystem. Visit the IMSCC page for more information.